We spent the last few hours driving back to Christchurch.  Paul told us that if we arrived back with enough time to spare we would drive up to the Cashmere Hills to a lookout over Christchurch.  Most of us were apprehensive about going back to there because of the quakes we’d felt first time.  Some people were only staying in town for one night but I was staying for two nights.  We drove up and through the hills, passing some severely-damaged homes.  Once we reached the lookout we were holding on to the rail and it started shaking slightly.  Most of  us didn’t take any notice until one person said it was a small earthquake.

The views from the lookout though were fantastic.  We could see to the city to the north and the west to the airport and the mountains beyond. 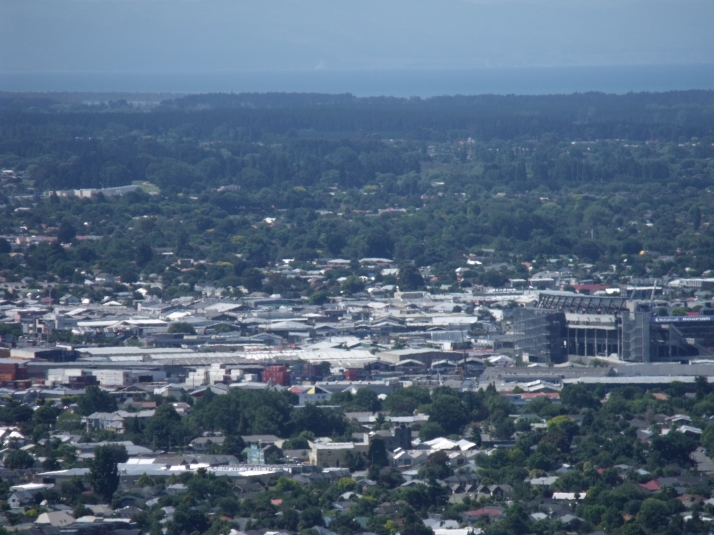 The remains of a building damaged in the earthquake just before Christmas 2011.

The Sign of the Takehoe, a beautiful reception building in the Cashmere Hills that was damaged in the quakes.  It was closed pending evaluation of damage.  I’ve recently googled it and believe it will reopen.  I’m so glad to find out it wasn’t going to be demolished.

From the hills we returned to the Christchurch CBD and our accommodation.  It was so hard to believe that we were back already but we had all had such a fantastic time, seen so much and taken so many photos over the past 7 nights.  Unfortunately there was no formal farewell dinner that night.  My parents were flying in from Melbourne and we were hiring a car and spending the next 11 days driving around the top of the South Island before catching the ferry to the Wellington.

Some of the other passengers were flying home, others were continuing on to the North Island with the tour.  Carol, Brad, Bec, my parents and I had dinner in the Tudor restaurant and I ate the same main meal I’d eaten on the first two nights at this restaurant.  It was still just as delicious.

That night was spent in a motel around the corner in Bealey Avenue which originally was part of the Red Zone.